PEunion encrypts executables, which are decrypted at runtime and executed in-memory. 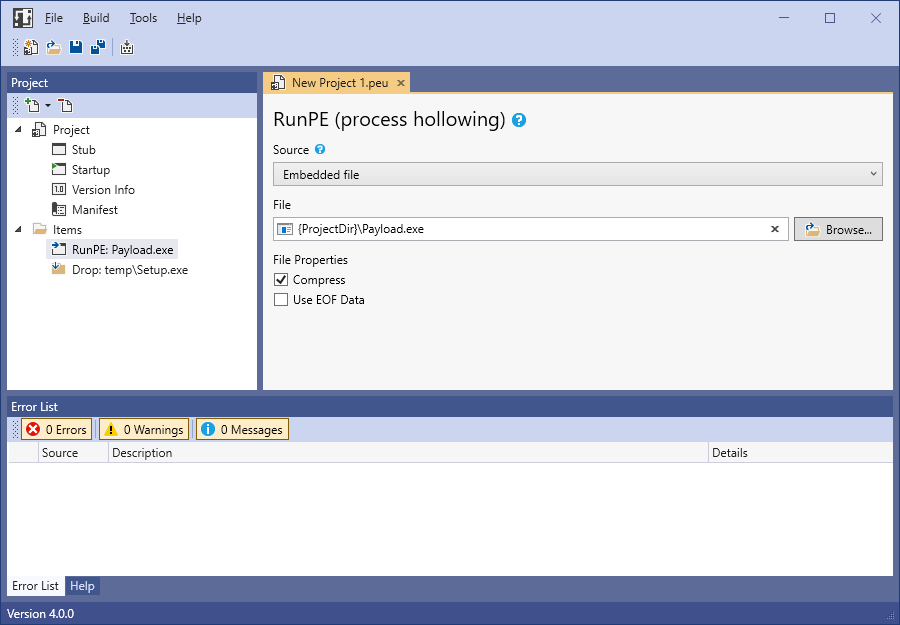 Two stubs are available to choose from, both of which work in a similar way. 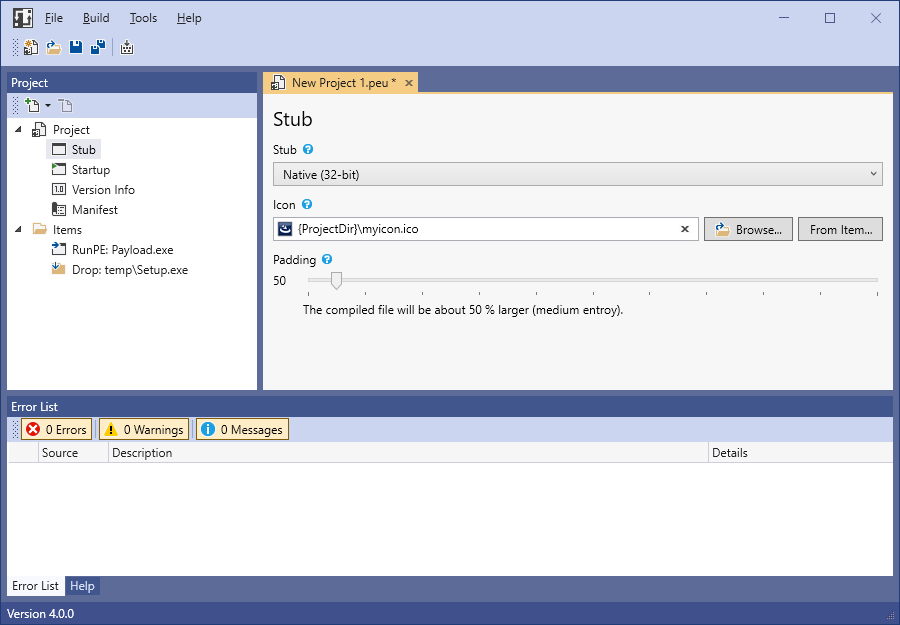 Multiple files can be compiled into the stub. A file can either be embedded within the compiled executable, or the stub downloads the file at runtime.

Typically, an executable is decrypted and executed in-memory by the stub. If the executable is a native PE file, RunPE (process hollowing) is used. For .NET executables, the .NET stub uses Invoke. Legitimate files with no known signatures can be written to the disk. 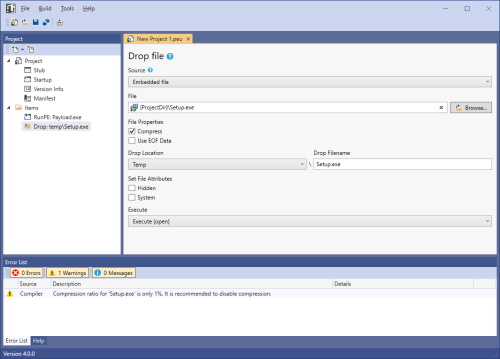 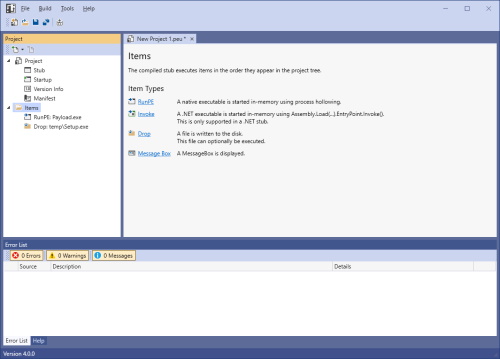 Obfuscation and evasive features are fundamental to the design of PEunion and do not need further configuration. The exact implementation is fine tuned to decrease detection and is subject to change in future releases.

This graph illustrates the execution flow of the native stub decrypting and executing a PE file. The .NET stub works similarly. 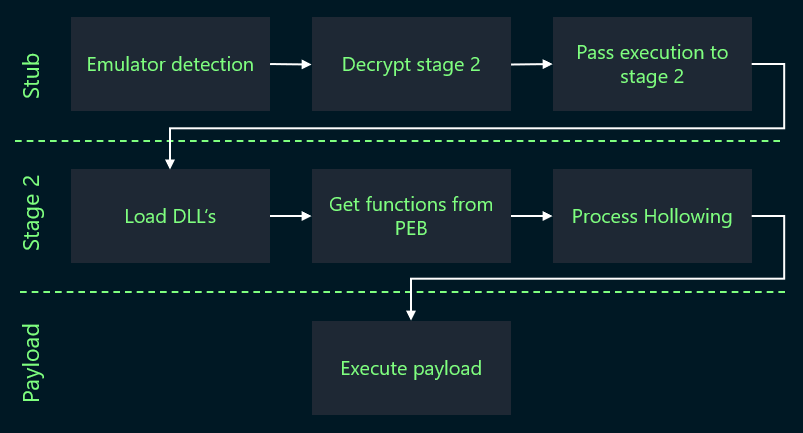 The fundamental concept is that the stub only contains code to detect emulators and to decrypt and pass execution to the next layer. The second stage is position independent shellcode that retrieves function pointers from the PEB and handles the payload. To mitigate AV detections, only the stub requires adjustments. Stage 2 contains all the "suspicious" code that is not readable at scantime and not decrypted, if an emulator is detected.

The shellcode is encrypted using a proprietary 4-byte XOR stream cipher. To decrease entropy, the encrypted shellcode is intermingled with null-bytes at randomized offsets. Because the resulting data has no repeating patterns, it is impossible to identify this particular encoding and infer YARA rules from it. Hence, AV detection is limited to the stub itself.

Assembly code is obfuscated by nop-like instructions intermingled with the actual code, such as an increment followed by a decrement. Strings are not stored in the data section, but instead constructed on the stack using mov-opcodes.

The C# obfuscator replaces symbol names with barely distinguishable Unicode characters. Both string and integer literals are decrypted at runtime. 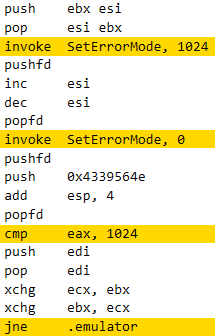 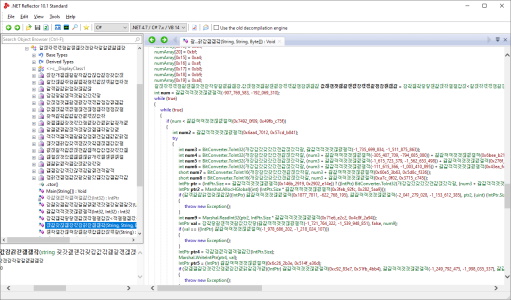 The Unicode character U+202e allows to create a filename that masquerades the actual extension of a file.

It is a simple renaming technique, where all characters followed by U+202e are displayed in reversed order. This way, an executable can be crafted in such a way that it looks like a JPEG file. 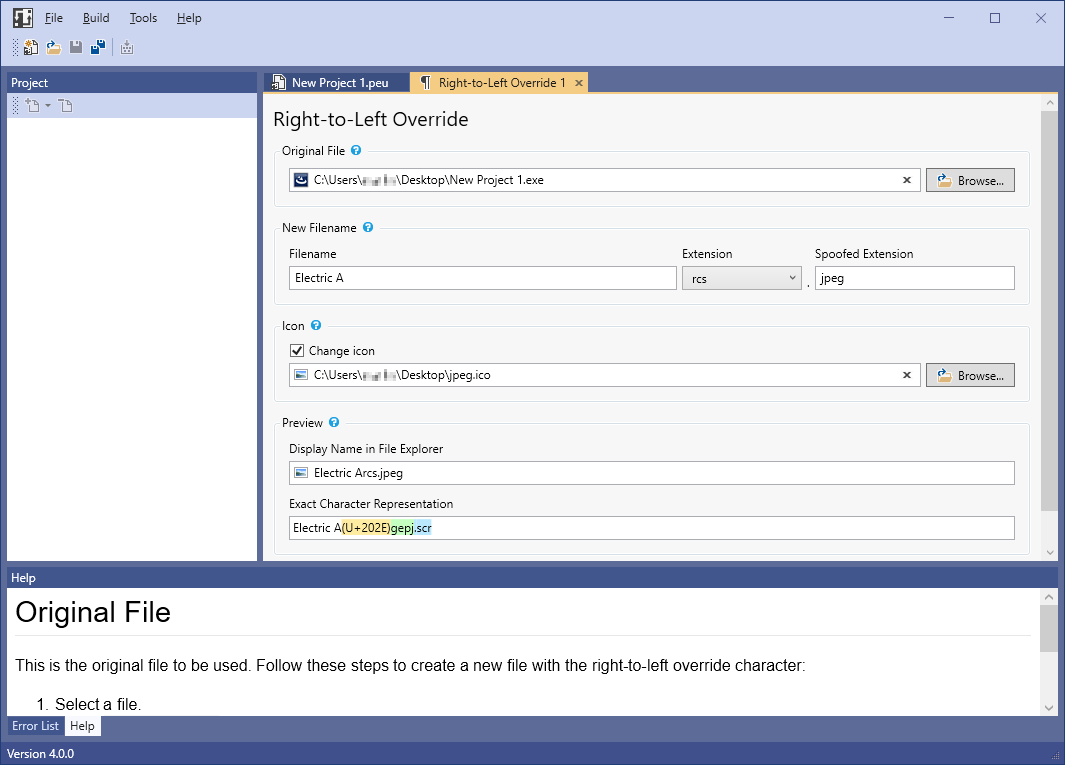 In order to use this program, you should:

I do not take any responsibility for anybody who uses PEunion in illegal malware campaigns. This is an educational project.

This project is FUD on the day of release (September 2021). A crypter that is free, publicly available, and open source will not remain undetected for a long time. Adjusting the stub so it does not get detected is a daunting task and all efforts are in vain several days later. Therefore, there will be no updates to fix detection issues.

Rather, PEunion offers a fully functional implementation that is easy to modify and extend. If you want PEunion to be FUD, please get familiar with the code of the stub and adjust it until you are satisfied with the result.

However, additional evasion techniques may be implemented in future releases to improve the baseline design.